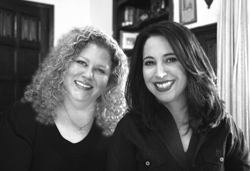 NATALIE AARON was born in Kansas and raised on the quick wit of The Simpsons. When she realized show business wasn’t going to relocate to the Midwest in the foreseeable future, she loaded a U-Haul and headed to L.A. Based solely on her astrological sign, she was hired to work as a PA on commercials and music videos—only confirming that what she had heard about L.A. was true.  Next, she graduated to Taxicab Confessions, where she witnessed drunken Las Vegas hedonists signing away their dignity for a chance to appear on TV.

Natalie went on to such critically-acclaimed shows as Behind the Music and AMC’s Movies That Shook the World, where she learned the delicate art of coaxing compelling interviews from reluctant celebrities. Her recent producing credits include The Judds, Ruby, Sweet Home Alabama and Little People, Big World.  Natalie lives in Los Angeles and hardly ever wonders how she wound up doing this for a living.

MARLA SCHWARTZ was born and raised in Los Angeles but moved to England to pursue a graduate degree in Medieval Studies.  Though Marla’s head was turned by the dazzling array of career opportunities awaiting a Medieval Studies graduate, she instead put her academic skills to work as a Historical Content Analyst for Steven Spielberg’s Survivors of the Shoah Visual History Foundation.

Two years of rewarding labor on that project led to her employment as Head Researcher for Dreamworks Animation, as well as for writer/director Andrew Niccol.

Marla’s extensive credits as a reality television producer partially include Blind Date, Starting Over, Making the Band, Bands Reunited, Bad Girls Club, Dane Cook’s Tourgasm, and Wanted:  Ted or Alive, an assignment that required her to screen footage of a deer being shot, gutted, and cooked.  Marla lives in Los Angeles with her husband and daughter and hardly ever wonders how she wound up doing this for a living.